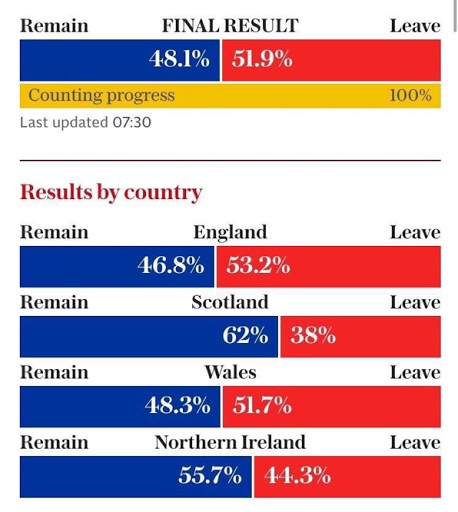 British pound suffer the biggest drop in its history, down to 1985 levels. European shares are bleeding more than -5% while Asian shares are not far behind. Flight to safety made gold rises, European govt bond yield drops (some to negative yields), even bitcoin rises, Swiss franc and Japanese yen surges, and that yen surge crashed the Nikkei in return down to -8%.

All thanks to Brexit. And Brexit is David Cameron’s massive own goal.

In 2013 David Cameron promised to set an EU referendum if his Conservative party wins the 2015 election. At that time migration was not a problem yet for EU and the economy was relatively better, so the call for referendum was his 1st political gamble.

Ever since the days of Margaret Thatcher, the Conservatives has been divided between pro-Europe and Euro-sceptics, and the ugly internal rifts have cost the jobs of Margaret Thatcher herself and John Major. Now with David Cameron reigning as the Conservative leader, by pledging the EU referendum by 2017, he will take forward this internal conflict into the national stage.

And then earlier this year in February there was an EU summit negotiating Britain’s membership, and long story short Cameron did not get the terms that he wanted. Straight after the (failed) summit Cameron then finally declared referendum date of 23 June 2016. That’s his 2nd political gamble, to use the referendum as a leverage for negotiating his terms with the EU.

But by now, the migration problem has become a huge crisis for the EU and the economy is practically on life support (negative interest rate and infinite QE by the ECB, among others). And against all betting odds, polling numbers and analysts predictions, Britain voted to leave the EU.

Remember that Cameron, who initiated the referendum, pleaded the public to vote remain. Why would he initiate the exit referendum only to ask the voters to choose stay? Because he thought the public would vote to stay, and that bluffing tactics would give him the advantage to push the terms that he want to the EU.

It’s a massive political own goal, and the world have to endure the consequences (especially the economic costs) and the ripple effects, in which Britain’s exit seems to have opened a pandora’s box where European right wing parties now demand their country’s referendum, Scotland and Northern Island are demanding for their own referendum (since they wish to remain in Europe), while even some folks in Texas are also demanding for a “Texit” referendum.

The high ranking EU officials made it very clear, they are angry that “a whole continent is taken hostage because of an internal fight in the Tory (Conservative) party”, in which the Euro-sceptics led by Boris Johnson won. As a response of his defeat, David Cameron then resigned as the party leader (and effectively as the Prime Minister) and he stated that he will not submit Article 50 to the EU (the official request to start the exit negotiation that will take up to 2 years to complete) before the Conservative elect their new leader in October, which would probably be the Brexit winners Boris Johnson and/or Michael Gove.

In other words, it is as if Cameron is saying to Boris and Gove screw this, you made Britain exit from the EU I’m not going to take care of the exit process. And the lingering of submission of Article 50 to the EU before October will cause a lot of uncertainties in Britain, in EU and in the world markets.

Update: on 30 June Boris Johnson made a shock announcement that he won’t be running for the Conservative leadership election. The mood of the majority is probably best captured by one tweet by Ewan McGregor who said: “@BorisJohnson You spineless c$&t You lead this ludicrous campaign to leave EU. Win, and now fuc& off to let someone else clear up your mess.”

If [Cameron’s] successor is a Brexit leader, Britain can look forward to being led by someone who has spent the last ten weeks spreading lies [Project Syndicate / Chris Patten]

Recap: 8 of the most misleading promises of the Vote Leave campaign [The Independent / Bethan McKernan]

The “reverse Greenland”: One solution that could prevent dismantling the United Kingdom after Brexit [Quartz / Aamna Mohdin]

Article 50: Withdrawal of a Member State from the EU [European Parliament]